Under 8s lift the trophy at Summer Fields Football Tournament!

Well done to the Under 8 A football team who triumphed over 20 other teams from London and the South-East - a wonderful achievement!

Many congratulations to Jack Young, Henry Powis, Misha Ordovas, Gabriel Shekiluwa-Cardoso, Walter Nutter, Tony Cheung, and Toby Dodwell-Bennett. The boys won all four of their group games before storming through the quarter-finals and semi-finals to reach the final. There they met Eaton House the Manor, who had won the tournament three times in the past, but the Papplewick Under 8 A team came out on top winning the Final 2-0. 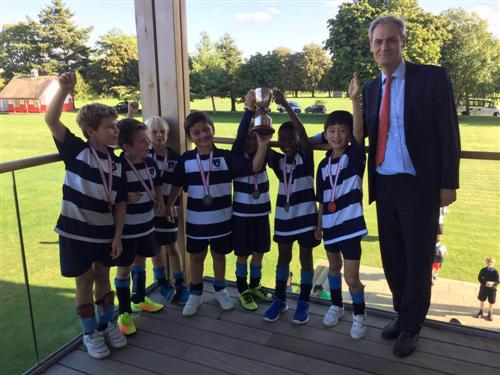 The victors with the Summer Fields Headmaster, David Faber.