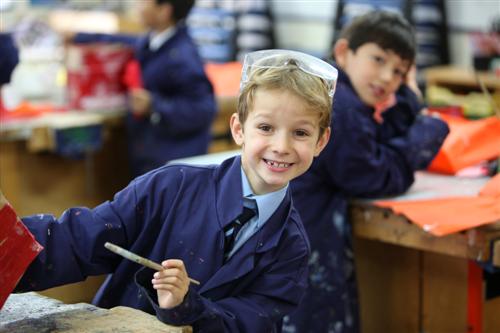 At Papplewick, education in art is seen as a time in the week when pupils are encouraged to extend not only their powers of creativity, imagination and awareness of the visual world, but also as an opportunity to develop their mental powers. We follow a structured teaching programme which builds upon their skills as they progress through the school. We encourage an appreciation of different cultures and artists throughout history. Papplewick has a well equipped art room with additional facilities for both ceramics and printmaking.

Boys showing potential are invited to attend extra art activities and are expected to work with commitment. They will compile an extensive portfolio in preparation for taking an Art Scholarship to their chosen senior schools. Serious applicants have a truly demanding and time consuming task but also have much to gain. Emphasis is placed upon the progress of all boys throughout the school, rather than just on scholarships although we have enjoyed considerable success in recent years.
The school has a number of large panels which have been the result of larger group projects. These can be seen in different locations around the school and there is an annual art show at the end of the Lent term in which we celebrate the achievements of the whole school.

Drama begins in the Lower school where boys are encouraged to listen to each other and work together to a common goal. They take part in poetry reciting and class plays as well as variety shows which blend public speaking, music and group work.
Throughout the school, each year every year group takes part in a stage play as well as having weekly drama lessons in the Michaelmas and Lent terms to foster the work begun in the Lower school. All take part in a Spring Arts Festival at Easter. The senior boys often do plays in chapel as well as put on full musicals each Christmas. This has become the greatest team sport as most productions have large casts.