Harvey Lin, a gifted pianist and student at Papplewick School in Ascot, showed off his skills at a major music competition at the Royal Albert Hall in London on 13th March. Having won first prize, he played Chopin’s Fantasie Impromptu in C Sharp at the International Music Competition Grand Prize Virtuoso World Premiere.

Harvey performed on a hand-built Yamaha S6 Grand Piano, the only one of its kind in Britain, originally played by Sir Elton John.  He appeared alongside others considered to be among the world’s greatest young pianists, violinists, flutists, euphonists and cellists. 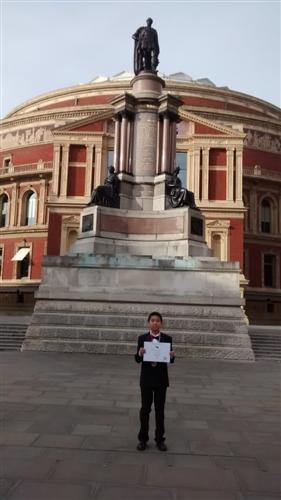 At nine years old, Harvey was the youngest participant in the BBC Young Musician of the Year and the youngest competitor ever to get through to the second round.

He has won numerous top awards at International and National piano competitions, including first prize in the Emmanuel Trophy Piano Competition in May 2014, one of the most prestigious competitions in the UK.  In February 2015 he obtained his LRSM Diploma in Piano Performance, with a Distinction.  He is the youngest LRSM Diploma holder in the ABRSM history.