In our debut performance in the National Inter-School Quiz, a team of four boys won the Area Heat to progress to the semi-finals of the Championship.

It was fingers on keypads as three teams went to Elstree School for the Quiz Club National Inter-School Quiz Championship Area Heat. The quiz featured a diverse range of questions which took them back in time as well as out into space. Forty on-screen questions were read out and tension mounted as the 30 seconds for each response elapsed. Music and sound effects added to the excitement and once the answer was revealed, the scores for each team added up on the screen to give the running total.

Papplewick 2 team took the lead early in the quiz. They had an excellent grasp on their contemporary general knowledge which put them ahead of the rest of the competition and despite a nail biting Final, came up trumps. They will now go on to represent the school at the semi-finals of the National Inter-School Quiz Championship. Congratulations to all the boys who represented the school. 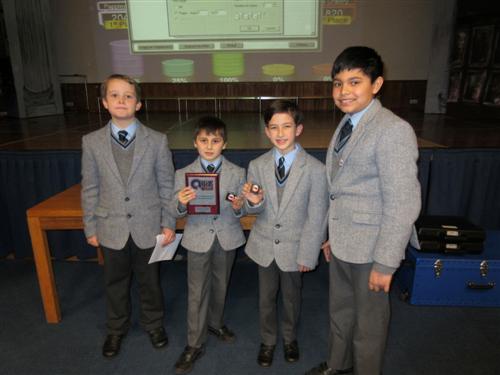 It was a pleasure to take them, they were great ambassadors for the school.

Many congratulations to all the boys who took part, and particular thanks to Miss. Taylor for taking the boys over to Elstree.