If you have any Old Boys' news, please email it to the Old Boys' Secretary, Tony Sparshott, atsparsant@gmail.com 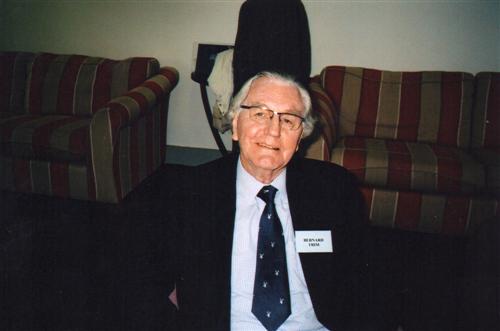 Bernard Trim, who returned to Papplewick for Old Boys' Day 2016. He was one of the nine boys who started when the School opened in September 1947.

As from 25 May 2018 the laws on data protection have changed with the arrival of the new General Data Protection Regulation. The most significant part of the new laws is the need for explicit consent from Old Boys for the use of stored data for activities beyond the purpose for which it was gathered. This means that although the Editor can keep the protected database for the annual distribution of ‘The Old Papplewickian’, the list of Missing Old Boys has had to be removed from the Old Boys’ page of the website because the general public has access to this.

The weather at the start of the Old Boys' cricket match against the Headmaster's Xl this year let us down and the first bit of activity took place in the School reception area where we drank coffee and watched the rain falling. Things cheered up, however, and in less than hour the Old Boys’ team were out in the field, the sun emerged and it remained hot for the remainder of the day. The first four or five batsmen of the HM’s team scored steadily while our bowlers proved less effective than in recent years - though Ranvir Singh, Sehaj Dhaliwal and Alexander Bovill took a couple of wickets apiece. But the Old Boys failed to hold too many catches during the course of the innings with the result that runs kept coming as the HM’s team brought the total to a close at 225-9.

When the Old Boys batted they never really got off the mark. The opposition bowlers kept a tight grip on the game with the result that there were few long batting partnerships from the Old Boys, though William Bovill’s innings of 35 gave us hope when he was at the crease. But the fielding team caught their catches well – all six of them – and only four of our batsmen reached double figures, which was not enough against a sharp HM’s team and resulted in our being dismissed for only 124 runs – 102 short of the target.

In spite of the margin of the defeat it was an enjoyable game both to watch and play and the sizeable number of spectators was well entertained. It was good to see some new faces representing the Old Boys’ team and we hope to see more of them in the years to come. It was also a pleasant surprise to welcome back Peter Scoble, who was a boy at Papplewick between the years 1948-51. In the 1970s he joined the Governors, serving two stints as Chairman then and in the ‘90s.

If you have not been receiving the annual 'Old Papplewickian' by post, there is every possibility that we simply do not have your name on our database or that you have moved house and have not passed the news on to us. If this is the case, please would you contact Tony Sparshott (sparsant@gmail.com) to let him know your postal address and we shall ensure that you will receive a newsletter in the future. Many thanks.